Do you know that on Facebook there are only 2 female Darnly's? (the other Darnly is in Canada)  There are 5 males named Darnly mostly in the middle east or England.  Six people listed have Darnly as a last name and there is a Darnly Hotel in the southern UK. 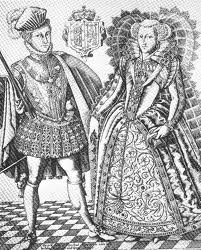 The name is English and is spelled both with an e (Darnley) and without. The second husband of Mary Queen of Scots was Lord Darnley.  He was actually killed at some point and it is not know if the Queen played a part in his death.  He really was a scoundrel.

So where did my mother, in 1947, find the name Darnly?  She was a voracious reader and found it in a short story/serial story in American Magazine.

Clarence Budington Kelland's stories were published in the American Magazine and Saturday Evening Post.  My mother found my name in a short story by him in the America Magazine.  When she first saw it she announced that her first daughter would be named "Darnly."  She actually named six of her eight children names she saw in those stories. (Darnly, Kim, Rick, Kerry, Kevin and Roxana.)

She also gave me a middle name—Donella.  Shortly after my birth, my grandfather Jacobs who was only 5'2" said, "She will never grow up with the name Darnly Donella Siefkas."  I not only grew up but I ended up almost 5 inches taller than Grandpa and 7 inches taller than my mother.  I should add that I didn't realize my mother was that short until I had been away at college for 6 weeks and then came back home to visit.

A name as different as mine has several advantages.

One is that people don't get me mixed up with someone else.  Years ago, I had friends from Iowa and friends from South Dakota who both ended up living in the same city in Michigan and going to the same church.  Of course they didn't know that the other couple knew me.  In a class one Sunday, one of them said something like, "Our friend, Darnly, once said...." Immediately the other couple yelled out, "You know Darnly?  We know her too."  And of course they were both talking about the same Darnly.

Another advantage is I can use my name on email addresses, and many other things and it is never rejected.

A disadvantage is that very few people get my name right the first time they hear it.  I've been called Darlene for years or Danly, Dannely, Donelly or even Damnly (that was a drunk professor in college).  Usually people spell it with an "e" so Darnley.

It is a surname here in the US and actually around the world and is usually used as a name for a male when used as a first name.

I have always had hopes someone would name their daughter after me. I mean I'm a nice person but I'm beginning to lose hope since none of my 3 offspring have married (yet).  However other possibilities are former students, women who have heard me speak at Retreats or other people I know who are of child-bearing age.  Guess I need to finish writing my book so then the child named after me could be told, "You are named after a famous author."

Seriously though, I love my name.  I'm glad it is different.  A unique name sets one apart just like being a "Christian" sets one apart as being "different".  I'm glad my mother was a reader and could visualize the name Darnly for her first-born daughter.  Truth is, I guess we should have named our daughter after me. (smile)  That was not one of Larry's suggestions especially since his mother had pointedly said shortly after we were married, "I certainly hope you aren't going to think of really unusual names for your children like 'Darnly'".