I was 29 years old and the sun was shining... above the clouds.

The day before, May 24, I was at home in Miller.  My mother had arrived the day before to help me with Greg and Renee--our third child was due to arrive in a couple of weeks, Larry, was still in the hospital not doing well after surgery to insert a shunt to relieve pressure building in his brain.

Friends (the Melbers and the Fremarks) had driven to Sioux Falls to get me on Saturday after I was told Larry would probably never be able to come home.  He was getting worse and I was trying not to panic. Because the delivery was approaching it had seemed best for me to get back to Miller.

The phone rang around 2 o'clock on Monday.  It was my dear friend Toni, who was now a nurse on the surgical floor where Larry had been since February after the accident.

Long story short...a blood clot had formed at the incision sight in his brain. Surgery was scheduled for the next morning.  I remember going in our bedroom and sitting on the bed crying...and praying. When I got up I called another friend, a nurse, who had just quit her job at the hospital.  She came and got me within the hour and we were back on the long road to Sioux Falls and Larry.

For the first time since the accident, he didn't even know who I was. He didn't even seem aware that we were there.  I sat by his bed and prayed.

Mary Lou and I stayed at the hospital for a couple hours and then went to a motel close to the hospital.

It seemed I had no more than fallen asleep when I woke up realizing that my water had broken.  Later Mary Lou would tell me that she had never seen anyone lose that much water...she told me, "That must have been God's way of protecting the baby in the accident.You didn't even look pregnant afterward."

And so it happened that while Larry was having surgery in one of the operating rooms, I was in a delivery room on the floor below him, giving birth to our third child. 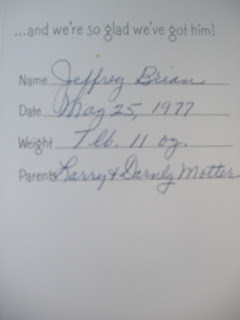 Jeffrey Brian was born shortly after 12 o'clock noon on May 25, two weeks early, weighing 7 pounds 11 ounces. He was perfect.  Dr. DeGeest back in Miller was pleased that Jeff was born in a "big" hospital since there could have been problems because of the accident.

Two hours after his birth, I walked to ICU to see Larry. He was alert and doing well.  The nurses had told him about Jeff. That is one name Larry has never forgotten.

Trusting God isn't easy.  We don't learn to trust when things are going well since then we don't think we need God...or at least we don't think about God much.  But the storms, the trials, the suffering, the really hard times are when God puts his arms around us and says, "Trust Me...lean on Me...cry on my shoulder.  I'm here and I will give you everything you need to get through this."

On May 24, when I was praying in my bedroom, I told God that Larry was His, not mine.  That He loved Larry more than I did. That He could do with Larry as He pleased. I gave up. I remember thinking that my purpose here was to glorify God and to enjoy Him forever. Life was all about God and I could trust Him with the outcome.

It's funny....or maybe not so funny, but I've had to learn that lesson again and again and in the same way...hard times when I get to the point where I am at the end of "me."

But isn't God good?  In May of 1977, He blessed us with a beautiful, perfect, bouncing, baby boy.

A son God has used to encourage me, challenge me in my spiritual life, make me laugh, make me cry, make me think (he was a philosophy major), and make me very thankful to a sovereign God who knows the plans He has for us...plans for good and not for evil...plans to give us a future and a hope...

Happy Birthday, Jeff!
And Thank You, God, for Jeffrey Brian.

Jeff with Larry at 1 month 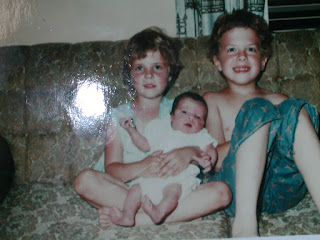 Proud sister and brother the day I came home with Jeff.