Today, I was reminded of an event.....not a pleasant event....but one that taught valuable lessons about people—how people, especially girls sometimes treat each other, even 50 years ago.

It was the first week of school—seventh grade—a time in life I had looked forward to.  It was a small school with all 12 grades in one small building with 10 classrooms. Grades 1-8 with two grades to a room and then 5 rooms for high school classes and the library.  School population was always between 80 to 100.

Until that year.  A "Trailer Park" had popped up close to the school and there were more than a few "new kids" because of the missile base being built close to our town (the 60's scare of nuclear attacks).  One "new" girl was in our 7th grade class. 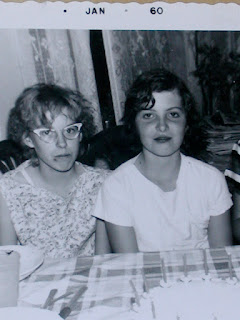 It was a good week with my best friend Barbara, we were wearing our look-alike dresses our mothers had made for us the year before.  We were no longer part of the "little kids." We were in Junior High!

Then without warning, on the fourth day of school my world came crashing down.  The new girl, who I thought was really COOL (after all, she lived in a trailer) said something to me I have never forgotten.  She asked sarcastically, "Why have you worn the same dress every day all week??  It stinks!"

I'm sure I said nothing because I was shocked.  Coming from a large family (at that time six kids), living on a dairy farm with a wringer washer and no dryer we had always worn the same outfit for at least three days.  All the dirty clothes were washed one day each week and it took Mom all day. We always changed into our barn clothes as soon as we got home to do our chores so our "good" clothes were never worn to the barn. 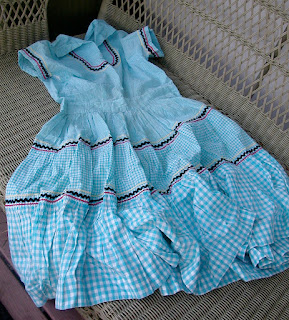 That first week of this special year of my life, Barbara and I wore our "best" dresses.  They were hand made, not a hand-me-down like our other school clothes. These dresses, with rick-rack between the skirt sections, were amazing.  If we twirled around really fast like ballerinas, the skirts were full enough to go clear out..... Mine was not dirty.....not one speck.

I think in that one question my innocence ended—maybe it was the tone or the contempt—in that moment I had been put in my place.  I went home in tears to tell my mother what had happened.  After hugging me, and saying she was sure the new girl really didn't mean anything by what she had said,  she had a solution.  Wear a different dress each day (I did have a few dresses for school) but don't put it in the dirty clothes basket until it was dirty.  She would trust me to figure that out.

Looking back, I even see my mother's wisdom in letting me for the first time ever, invite ALL of the girls in my class to stay overnight on my birthday in October.  And all the girls came and we had a great time running all over the farm, playing in the barn, riding my bike, and sleeping in the two attic bedrooms—my brothers banned from the rooms for the night.  And the "new" girl had a great time.

Solution solved...right?    Yes, but I never forgot.  I was relieved when that girl moved on—her family moved on to yet another missile base being built.

Today, I was reminded, because that girl, that same "new" girl who found me last year on FB,  put a status update on her wall about bullying and how it is sad that it has gotten out of hand and there was never any of it when she was growing up.  Of course she said, "Well, if there had been bullying back then she wouldn't have let it happen to her.  Her father had taught her to be strong....."

Today,  I've been thinking about bullying.  I saw it when I was teaching....we usually called it "someone is picking on someone else" or "someone making fun of someone else." I know I missed most of it.....kids are sneaky.  But when I saw it happening I watched the offender closely and prayed for ways to teach everyone more about kindness and acceptance.  I'm sure I even "preached" a few sermons.  I tried to be a friend to the "picked" on while I encouraged students to reach out to others with kindness and acceptance.

I know in talking to other women that many carry the scars of hurts done intentionally or not when they were young.  Many times hurts that helped them grow or stunted their growth...stopped them in their tracks.  Today we need to help young people know that they can use the tough things to help them grow, to help them trust God more, to just help others more and help them see that everyONE, everyone feels like the odd one, the picked on one, the one who has gotten the raw end of the joke.

Looking back I understand why the "new" girl picked on me way back then.  She was in a new school and needed friends.  I'm sure the friendship Barbara and I had was something she wanted—I wonder if she had ever had special look-alike dresses with a best friend.  She knew she wouldn't be in the new school long and I'm sure that hurt.  It must have always hurt to leave friends behind.  I went to the same school all 12 years and I always had my BEST FRIEND or BEST FRIENDS.

By pointing out the shortcoming in others, we somehow think that makes us better.

And then I look at me—bullying? Picking on others?  Putting others down to make me feel better?

Never!!!  And least not intentionally.

Have I ever looked at someone else as being less than me?
Less deserving?
Less knowledgeable?
Less savvy?
Less skillful?
Less anything?
Of course I have.

Have those horrible attitudes affected
The way I react to that person?
The way I treat them?
The time I give them?
Yes, I have to admit, yes.  I know I have.

So God provided at the cross His Beloved Son to die for me, to pay a debt I couldn't pay no matter how good I was, no matter how hard I tried. 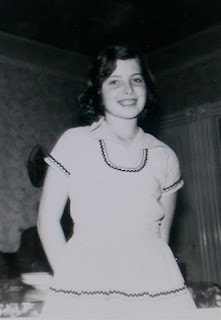 But Jesus could and He loved with such a love that He would.  He died for me—someone so undeserving....so proud, so arrogant, so nasty, so self-centered, so unholy—He died for me.

But even when I was still a sinner, filthy dirty, dead, stinky, He died for me.

And then He covered me with His righteousness, a pure, white, unspotted righteousness.  Can't I do that for another?  Can't I see them through the eyes of the Savior, as pure, undefiled, unblemished?

Okay, maybe he sees He sees me in a turquoise checked Indian dress,
but it is clean,
washed as white as snow
and it never needs washing again.

[The pictures?  Barbara and I at that October birthday party; that is the dress preserved in the cedar chest; and me at Christmas dinner at Grandma and Grandpa's in THE dress. It was a sad day when I outgrew it.]